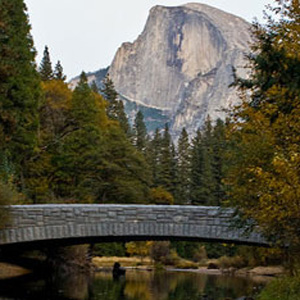 Half Dome is the world’s most recognizable rock formation. It’s distinct shape lead geologists to believe that the other half eroded away. Today, many believe that it is quite possible that there never was another half, at least not one as well formed as the eastern slope. Half Dome rock, North America’s sheerest cliff with a 93% grade, reaches nearly 8,900 feet, rising almost 5,000 feet from the valley floor.

Did you know that you can hike to the top of Half Dome? This is not an easy hike, especially the last bit where you have to go up the side of the dome with the help of cables. This hike will take a full day and you have to be well prepared and get a permit. If you don’t have a permit in time know that during the hiking season approximately 50 permits will be available each day by lottery, where the winners get to hike Half Dome two days later.

Sentinel Bridge is shown at the bottom of the photograph. You can see a reflection of Half Dome in the Merced River from this bridge.