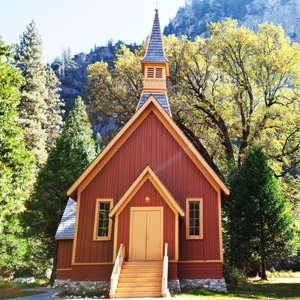 We make sure to go by the old wooden Yosemite Chapel, a great background for treasured photographs, especially for all the Yosemite Wedding couples visiting each year. The Chapel was built in 1879, and is the oldest standing structure in Yosemite National Park. It was designed by San Francisco architect Charles Geddes in the Carpenter Gothic style. The Chapel was built by Geddes’ son-in-law, Samuel Thompson, for the California State Sunday School Association, at a cost of three or four thousand dollars. It was originally built in the Lower Village, which is the present day trailhead of the Four Mile Trail. The Chapel moved to its present location in 1901.