1-559-658-8687 ClientCare@yosemite1.com
View Our Most Popular Yosemite ToursHome Page
Travel in Style and Tour in Luxury 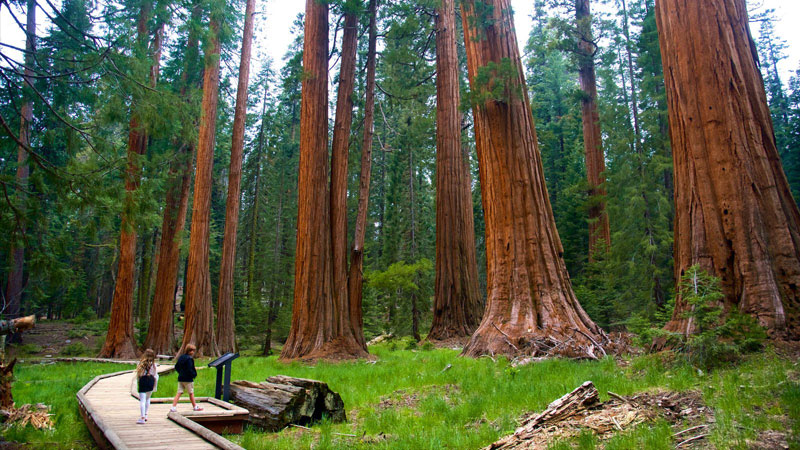 Private SUV Tour
Includes pick up/drop off from your hotel
$925/party of up to 4 persons.
$250 deposit. Balance collected within 30 days of tour.

Private Van Tour
Includes pick up/drop off from your hotel
$1075/party of up to 9 persons.
$250 deposit. Balance collected within 30 days of tour.

Private Minibus Tour
Includes pick up/drop off from your hotel
$2550/party of up to 16 persons.
$250 deposit. Balance collected within 30 days of tour.

NOTE: We may not always be able to access all of Sequoia and Kings Canyon during the winter because of road closures.

We visit Sequoia National Park, made famous for the Giant Sequoia Redwood tree, which is the world’s largest tree by volume. Our tour begins at the Three Rivers entrance into the Park. Located in the foothills of the Sierra Nevada, the small town of Three Rivers is named after the nearby junction of the North, Middle, and South Forks of the Kaweah River. We climb the majestic Moro Rock, which is a giant granite dome formation with a stairway leading to the top, which offers views of Sequoia Park and the Great Western Divide. We visit the beautiful renovated Giant Forest Museum, which gives an introduction to the Giant Sequoias, the meadows, and the human history of the area. Don’t miss the outline (on the pavement) in front of the Museum. It gives you an idea of the scale of the Sentinel Tree as if it were laying on the ground. Nearby is the Tunnel Log, which is a giant sequoia that fell across the Crescent Meadow Road in late 1937. According to the National Park Service, “The following summer, a tunnel was cut through the fallen log as a visitor attraction. When it fell, the tree stood 275 feet high (83.8 meters) and was 21 feet in diameter at the base (6.4 meters). The tree’s age when it fell has not been determined, but probably exceeded 2,000 years.” We view the General Sherman Tree, which is the largest (by volume) tree in the world, measuring over 52,500 cubic feet (1,486.6 cubic meters). we visit the Wuksachi Lodge, which is “Sequoia’s signature hotel, a striking stone-and-cedar mountain lodge situated in the heart of the park and surrounded by a mighty sequoia forest and soaring Sierra peaks” (National Park Service website).

We start with the General Grant Tree, which is the second largest tree in the world! Then, we visit Boyden Cavern, a giant underground cavern within King’s Canyon National Park. Next, we visit Roaring River Falls, a 40 foot tall waterfall dropping over a narrow ledge.  Zumwalt Meadow is next on our agenda. This 1.5 mile gentle hike allows you to view the Kings River with vast granite walls and green meadows as your backdrop. Finally, we take a beautiful drive to Road’s End, following along the King’s Canyon Scenic Byway.

In need of transportation between San Francisco, Los Angeles, Fresno, Oakhurst, Fish Camp, Coarsegold, Madera, Mariposa, Yosemite Valley, and Tuolumne Meadows areas? We offer comfortable shuttle service to and from these areas, including deluxe limousine service. Check us out here.